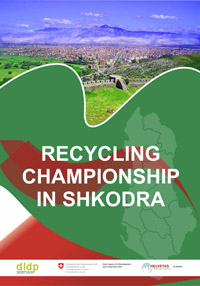 Shkodra municipality, one of the biggest in Albania, has been supported by dldp in organizing the waste collection system and extending it also in the suburbs of the city. After a long period of hesitations, financial and administrative burdens,this year (2014), municipality of Shkodra has started to dispose the waste in the regional landfill of Bushat. Since the beginning, municipality has seen recycling as a way of reducing quantities of waste disposed in the landfill, as well as a profit potential for local people.